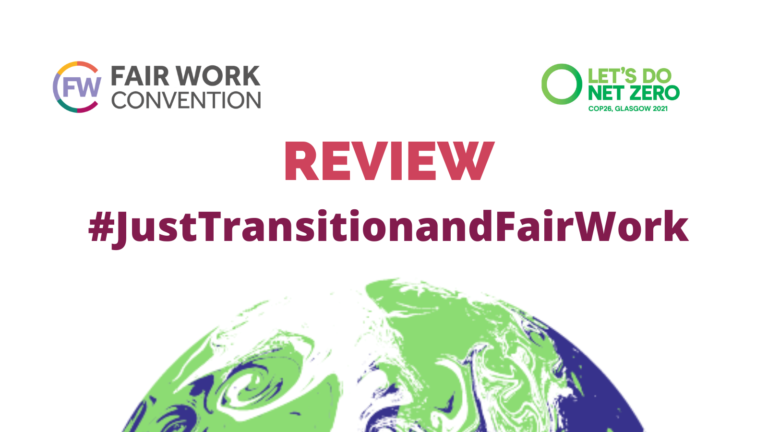 The Fair Work Convention’s ‘Rising to the Challenge: a Just Transition and Fair Work’ webinar was an opportunity to reflect on the 26th UN Climate Change Conference (COP26) and to explore and discuss the action Scotland must now take to create a net zero carbon economy by 2045 that has fair work at its heart.

The Fair Work Convention organised this webinar to help us explore practical action that we can take now to progress fair work and a just transition. A key tenant of fair work is dialogue and hearing different perspectives and so we were delighted to hear from our guest speakers, Professor Jim Skea, Chair of the Just Transition Commission, STUC’s General Secretary Roz Foyer, Aileen McLeod, Director of Business Planning and Commercial for Scottish and Southern Electricity Networks (SSE) and Alan Thornburrow, Director of Business in the Community (BITC) Scotland. 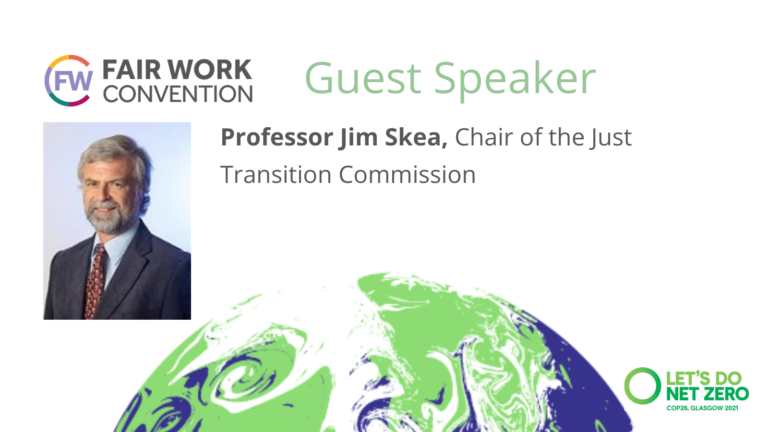 Professor Jim Skea spoke of his role as chair of the previous Just Transition Commission (JTC), its challenges and recommendations and how he recently agreed to continue in his role as Chair for the next iteration of the Just Transition Commission. The first JTC produced realistic and practical recommendations for ministers  whose remit was to scope out the economic opportunities to net zero, to build on Scotland’s assets and to think about the risks involved in terms of energy poverty, fair work, equity, justice and equality. Jim spoke of the JTC focus on issues around oil and gas, the supply side and the economy and also the impact that a just transition will have on consumers and communities.

The success of the first JTC is that the Scottish Government has accepted all of its recommendations and has revived the JTC with a remit to move towards the implementation stage. The next JTC will scrutinise and provide advice on the Just Transition Plan, to monitor and evaluate progress and to continue to engage with local communities and industries. The next JTC is currently being appointed and is expected to start meeting by the end of this year.

The Just Transition Partnership between the STUC and Friends of the Earth Scotland originally advocated the idea of the Just Transition Commission in Scotland and there is expected to be a strong union representation in the next JTC as there was in the first iteration.

Jim explained that Scotland’s economy wide approach to just transition attracted a lot of interest internationally and provides a model for others to follow. 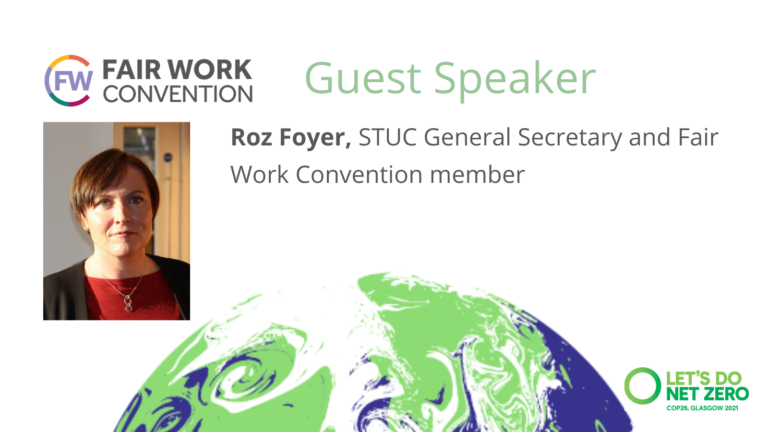 Roz Foyer, who joined the Fair Work Convention earlier this year and recently addressed COP26 on behalf of the Trade Union NGOs, argued that we need a just transition that is based on full employment, well-funded public services and high quality unionised jobs.

Roz set out the issue from the perspective of workers, reflecting on the STUC’s research into Green Jobs the focus of which is on delivering sustainability and fair work in every sector of our economy by placing workers’ voices at the heart of the debate. Roz also reminded us that the term ‘just transition’ was born in the labour movement and it is very important that workers continue to own it and be able to define it.

The STUC played an active role in COP26, within the formal process of being global trade union observers and of the wider COP26 Coalition who organised many of the marches and protests on the fringe of the conference. Roz explained that COP26 didn’t deliver on all the measures that the STUC set out but progress was made on putting just transition, labour rights and human rights into the main agreement. 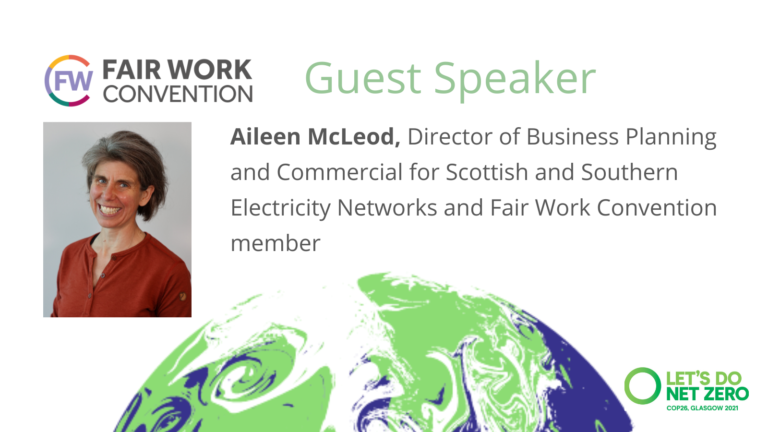 Aileen McLeod, who also joined the Fair Work Convention this year is a passionate advocate for the practical action needed for a just transition towards a ‘net zero’ society and economy. Aileen reflected on the issue from the perspective of an employer involved in the Just Transition and fair work, reflecting on action already taken by SSE and what the next steps will look like.

Aileen told delegates that SSE are developing and building some of the world’s largest off-shore wind farms as well as investing in on-shore wind. They have recently announced an enhanced capital investment programme of £12.5 billion over the next five years.

The transition from high carbon to low carbon energy is at the forefront of thinking at SSE of how this transition can be made to be ‘just’. Aileen described that the pace of change is accelerating and this creates huge opportunity as well as risks, not just for the industrial sector. It requires transformative thinking and focus to bring the fair work agenda into new ways of working in each sector.

Aileen’s advice, based on SSE’s experience of Just Transition is to firstly understand your starting point, where is your business with provision of fair work today? Secondly to be clear in purpose and planning. A clear purpose comprised of an assessment of the impact and determining where the biggest benefits of a just transition might be, define the principles that are going to guide your choices and then have clear measurable action to make just transition a reality. Finally Aileen spoke of the critical input of employee workers voice, which includes not just the employee but the impact of families and communities. As just transition is defined by social justice, the voices and experiences of everyone affected must be heard.

In 2020 SSE published its Just Transition Strategy , this set out in detail, 20 principles for a just transition which shows the impact of climate change on the energy sector and the scale of the opportunities and the risks associated with it. SSE are also a UK Living Wage employer (since 2013) and have recently become a Living Hours employer.

Aileen’s assessment of COP26 is that although COP conferences are necessary, change can come through businesses and industry networks, communities and households, working together in collaboration to make a difference and she believes that there is support and momentum in Scotland for this at the moment.

Finally we heard from Alan Thornburrow who delivers BITC’s strategy in Scotland, working across the public, private and third sectors. 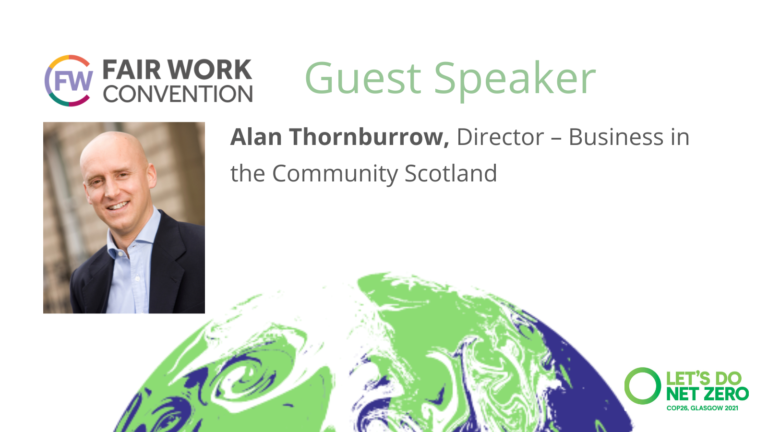 BITC have recently launched research into just transition and Alan explained that this research is from a sample of people across the UK. Other research BITC have undertaken has been on the impact of COVID-19  and the experience for work and wellbeing throughout the pandemic.

Alan explained that the findings of the COVID-19 research suggests that there has been a significant decline in workers’ mental health during the pandemic where work has been a significant factor. There has also been a sharp increase in working hours along with excess demand at work being sighted as contributing factors by UK workers.

The research into just transition looked into Scotland’s leadership around just transition going into COP26 and what is the UK experience of just transition. The findings suggest that the term ‘just transition’ was not widely recognised. A very low number of people surveyed felt that climate change will have an impact on their jobs, of those who do think there will be an impact, around half felt that their employer wasn’t supporting them to acquire new skills or transitioning them into alternative employment. The findings also found that the majority of those surveyed didn’t know what businesses were doing on climate change and of those who did know, there was mistrust that businesses would follow through with their commitments.

Alan’s reflections from Scottish businesses during COP26 was there was a need for much more focus on opportunities and focus on action for smaller businesses in the near term, looking at what can be done in the next six to twelve months as well as longer term ambitions.

BITC are keen to work across all parts of the economy, with trade unions, the Fair Work Convention and the Just Transition Commission on helping businesses to create effective just transition plans and to have employee/workers voice at the heart of that. 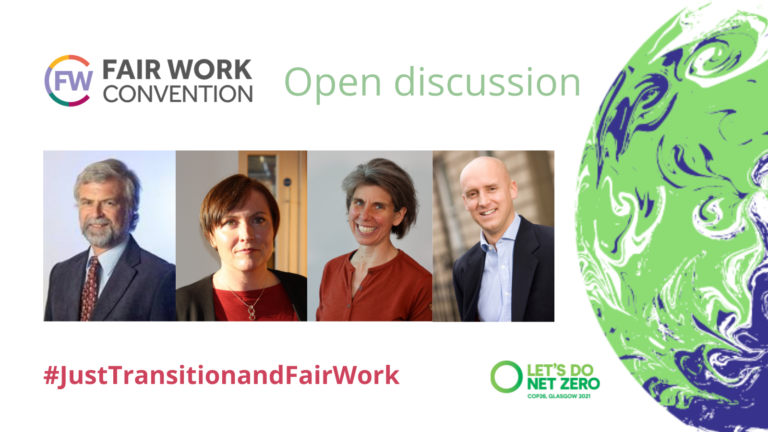 The panel then had an open discussion and took questions from our audience on a range of issues such as: what actions businesses can take now on climate change; the impact of in-work poverty; accessibility of fair work for ethnic minority communities; how to increase workforce diversity; re-skilling and how to make the green energy industry attractive for young people, conditionality; and the importance of employer dialogue.

To summarise what was an excellent session and debate, the event highlighted just how fundamentally important dialogue and collaboration with multiple stakeholders will be to delivering the urgent change we need. There is also a need to plan and monitor progress and evaluate implementation and change.

Ultimately we cannot waste time decrying different starting points or give up in the face of economic challenge. Rather we must face up to the crisis and take action to shape the sort of Scotland we want to live in.

The Fair Work Convention and the Just Transition Commission can play a powerful role to encourage change at a workplace level and to facilitate the steps that need to be made today. A fair work approach plays a critical and facilitating role in this agenda and will help employers and workers to better understand the issues and better embed the change that is needed.

We look forward to continued action on this as we work towards Scotland becoming a fair work nation by 2025 and to creating a net zero carbon economy by 2045 that has fair work at its heart.