Women over 50 in Scotland require greater support in the workplace to address persistent inequalities in pay and progression, according to the latest research by the National Institute of Economic and Social Research, conducted on behalf of Scotland’s Fair Work Convention.

Older workers now comprise around a third of the Scottish workforce, and this number is set to increase in the coming years. However, existing data shows that women in this age group often experience greater inequalities in pay than younger women in relation to men. The report calls for employers to take action to improve the experiences and opportunities for older women at work.

The report is based on research with women over 50 and employers in two specific sectors in Scotland: the finance / insurance sector; and the information / communications sector.

The research finds that women over 50 face a number of barriers to better pay and progression in the workplace. In particular, the report calls for employers to increase opportunities for flexible work for this age group, given that these women often have substantial caring responsibilities for their children, spouses, grandchildren and elderly parents.  The report also explores women’s concerns in several areas, including:

The research also finds that while many women are concerned about age discrimination, employers often fail to consider age as an important aspect of diversity and inclusion in the workplace. The report recommends that employers should increase their monitoring of pay, progression and training by age. Additionally, the report recommends that employers would benefit from increased support and guidance in addressing age discrimination in the workplace.

Katharine Stockland, Senior Social Researcher at NIESR, said: “This report shows that women over 50 experience barriers in the workplace that are specific both to their age and gender. In order to address these challenges around pay and progression experienced by this group of women, employers must reflect on their workplace practices and consider to what extent their training, support and promotion opportunities reflect the needs of this group of women.  Especially in the context of labour shortages that have been driven partly by older workers dropping out of the labour market, employers should act now”.

Fair Work Convention Co-Chair’s Mary Alexander and Patricia Findlay added: “We know the challenges faced by women at work do not simply start when a woman turns 50. The impacts of workplace policies and practices that systematically disadvantage women build cumulatively over an individual’s career. What this research demonstrates is that the intersection of age and gender is uniquely shaping women’s experiences of work in ways that are leaving older women significantly worse off both in career progression and in pay.

The Fair Work Convention calls on employers to take urgent action to support older women at work. Employers, the Scottish Government and trade unions all have a role to play in addressing this longstanding and deep-seated inequality, and it cannot just be left to individual older women to address these difficult issues on their own. Our research and response piece gives clear actions that employers and other can take today to improve fair work for older women.”

The full report, “Experiences of pay and progression among women over 50 in the workplace in Scotland”, can be found here 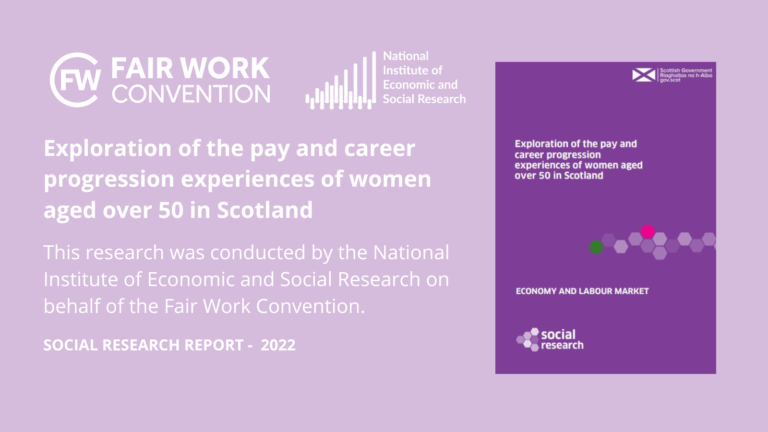