The Fair Work Convention has today published its ‘Fair Work Manifesto for Scotland’ urging all political parties to commit to delivering the national ambition of becoming Fair Work Nation by 2025. Its calling for all parties to put fair work at the heart of their manifestos and proposes some urgent steps needed to make fair work a reality by the end of the next Parliament. 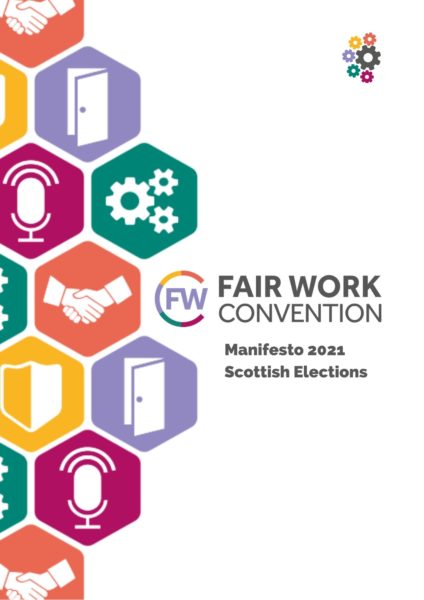 In the recently published ‘Fair Work in Scotland’ report, the Convention revealed that while improvements have been made on fair work, faster progress is needed if Scotland is to hit its target of being a leading Fair Work Nation by 2025. It also revealed that disabled workers, ethnic minorities, women and young workers often experience poorer work outcomes and are often more heavily concentrated in precarious and low paid work.  The report also found that there was significant variation by sector, with early evidence suggesting that the COVID-19 only widens the divide.

The Convention’s vision is that, by 2025, people in Scotland will have a world-leading working life where fair work drives success, wellbeing and prosperity for individuals, businesses, organisations and society. This commitment gained party wide support and was adopted by the Scottish Government  when it was launched as part of the Convention’s Fair Work Framework in 2016. Now with 2025 being within the next Parliamentary session the Fair Work Convention say that urgent action is needed to make this a reality.

Fair work plays a crucial role in achieving inclusive growth, more innovative and productive workplaces and eradicating in-work poverty. The Convention is firmly of the view that properly embedding fair work principles will also help Scotland respond to the challenges caused by the current pandemic as well as other issues around aging, climate change, automation, EU Exit and changes in patterns of global trade.  It is therefore essential that all parties in Scotland build fair work into their plans for recovery.

The Fair Work Convention have made seven key recommendations within its manifesto that are essential to making progress towards a Fair Work Nation.

The Convention calls on all political parties to commit to:

The ongoing public health challenges and the economic and social impact of COVID-19 has laid bare much of the unfairness at the heart of our economy and the need for fair work, but it has also increased the challenges we face with many sectors now under a range of ongoing and new pressures.

In the wake of such unprecedented shocks, progress towards achieving fair work is ever more crucial but not guaranteed.

There is much to be done if Scotland is to meet its vision to be a Fair Work Nation by 2025.  While progress has been made in some areas, the extent of persistent inequality at the workplace is deeply concerning.  The need for urgent action is clear and this is a critical time for our economy and for society.

Now is the time to reaffirm our commitment to fair work and its crucial role in delivering the type of Scotland we want and need.